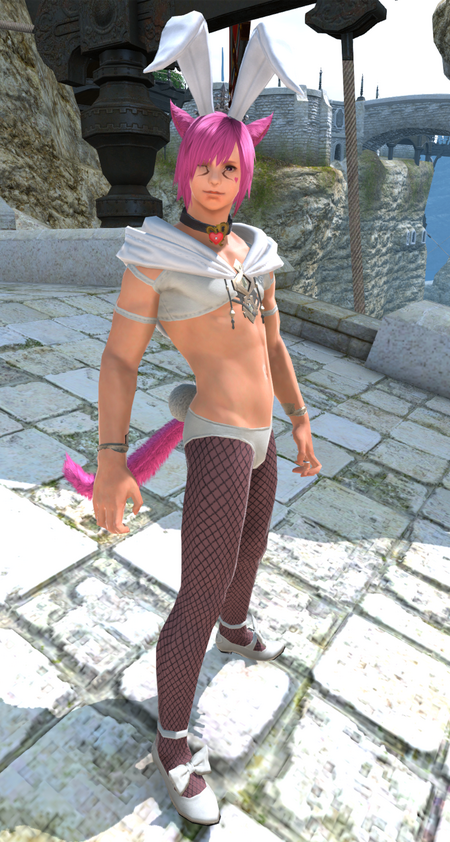 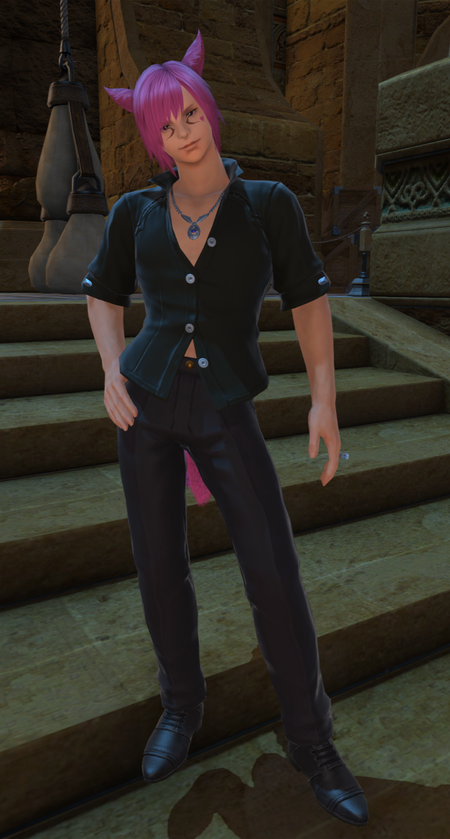 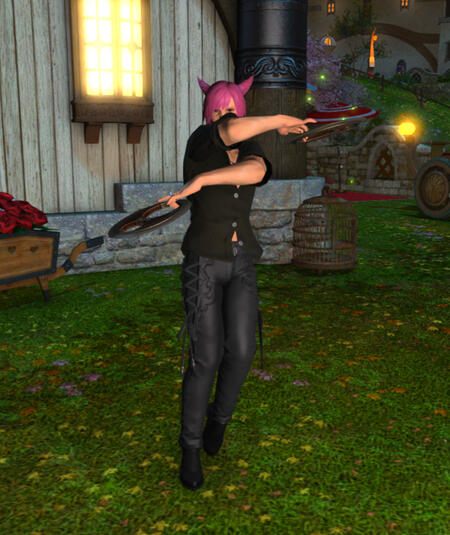 Seeker of the Sun culture sucks, so let's make our own tribe! 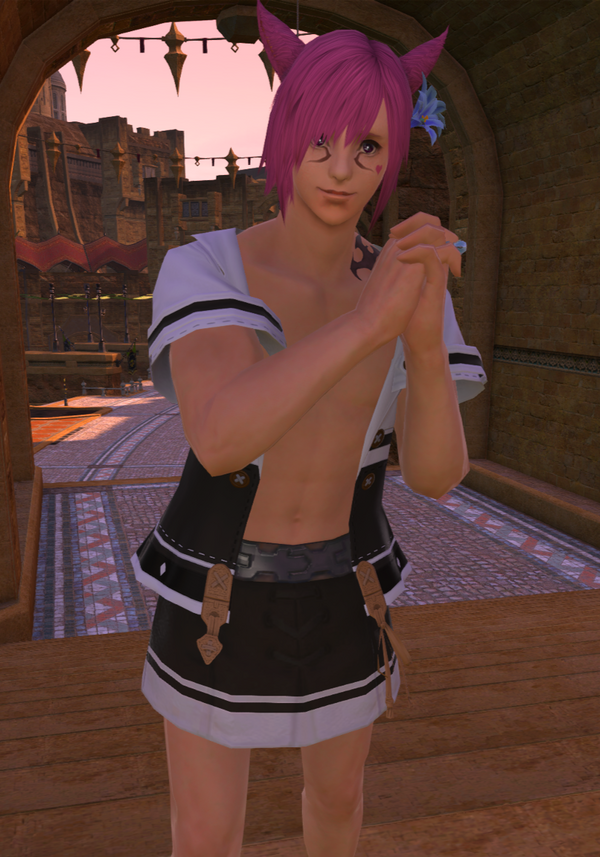 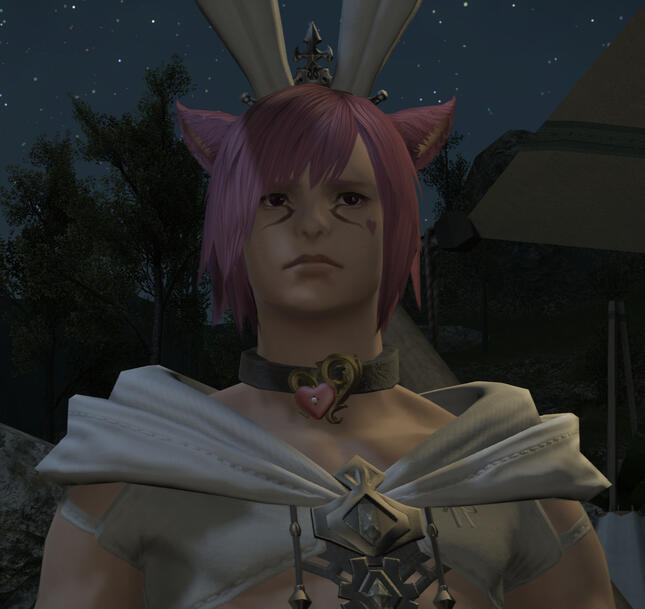 The Story So Far

There's a cute picture of my partner in this section. 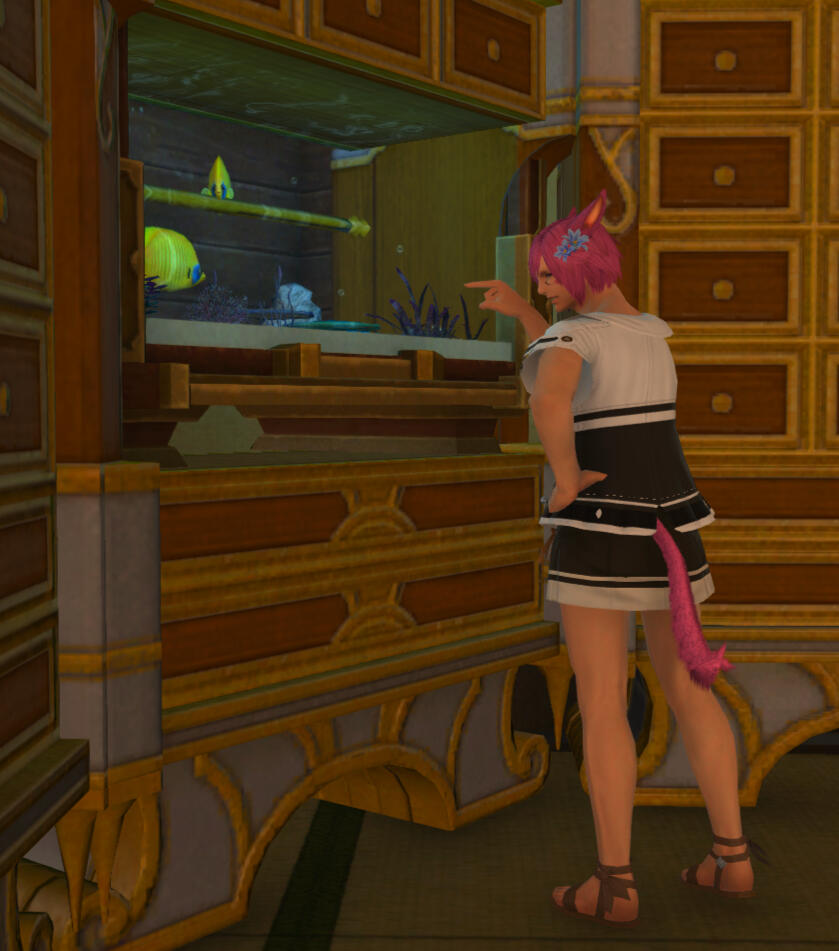 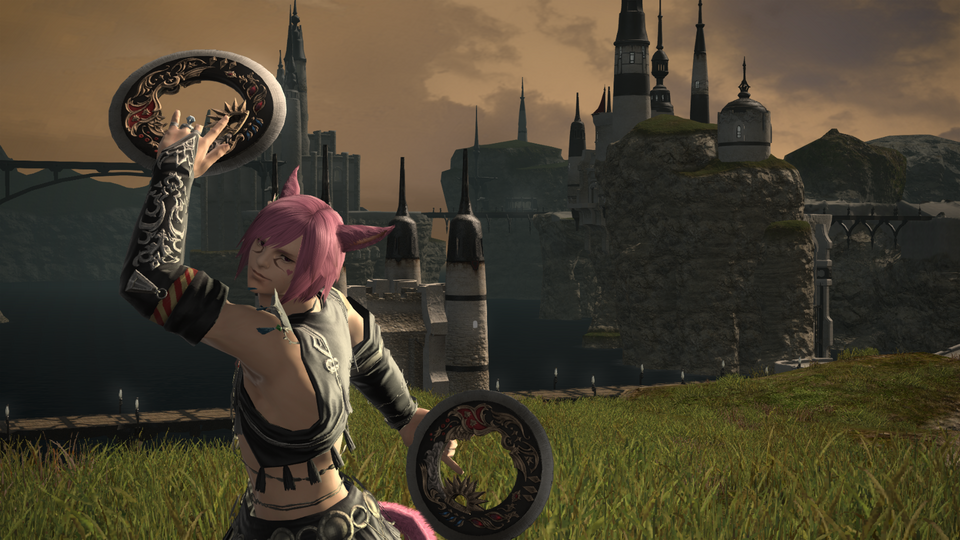 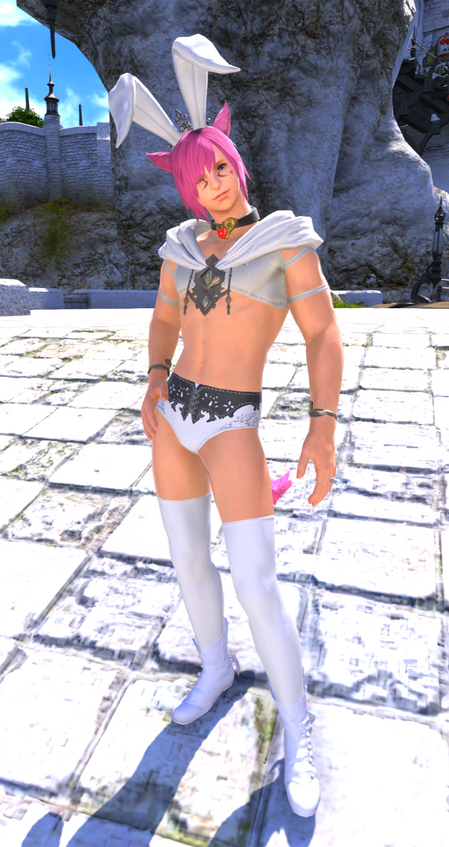 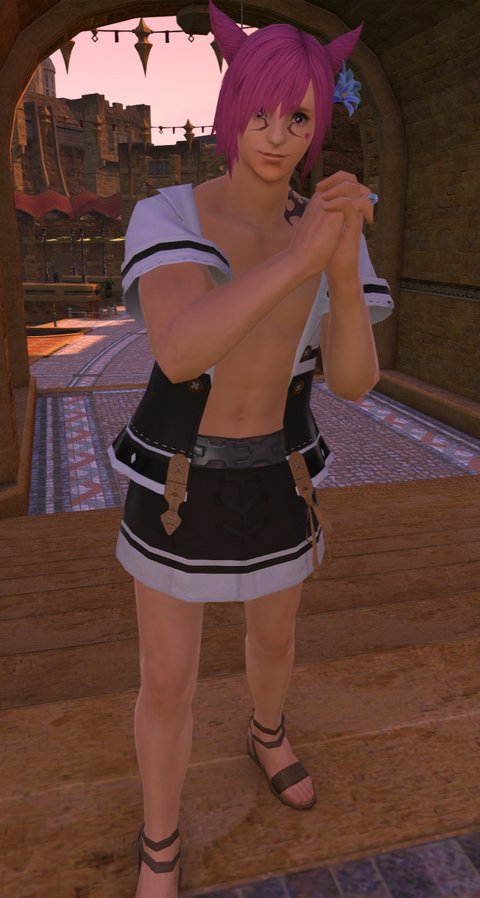 Ash'leytai is lighthearted and goofy. A himbo, through and through, he has a habit of saying surprisingly insightful things, and then totally ignoring his own insight. He's also very prone to misunderstanding things. How much of it is performative? More than you'd think, way less than you'd hope. And besides, much like his gender, Ash'leytai's personality is quite fluid. He'll rebel and leave his tribe over objections to their patriarchal society one day, then shrug and perform duties he morally objects to the next.

Being yet another thirsty gay catboy, Ash'leytai can be flirty, especially with those he knows. (He's also a total slut, but that's neither here nor there.) Many people call Miqo'te cats (I just did!), but Ash'leytai takes exception to this. He insists he's a dog! This, however, is betrayed by his cartoonishly cat-like speech quirks, often ascending into high-pitched speech punctuated by nyaa's—especially when excited/anxious/scared.

He's quite perceptive, in truth. How much of that perception he shares is... questionable, and what he shares is often claoked in humor. But he appears to have worthwhile insight underneath his gay himbo catboy surface be a normal dog, nyaa. 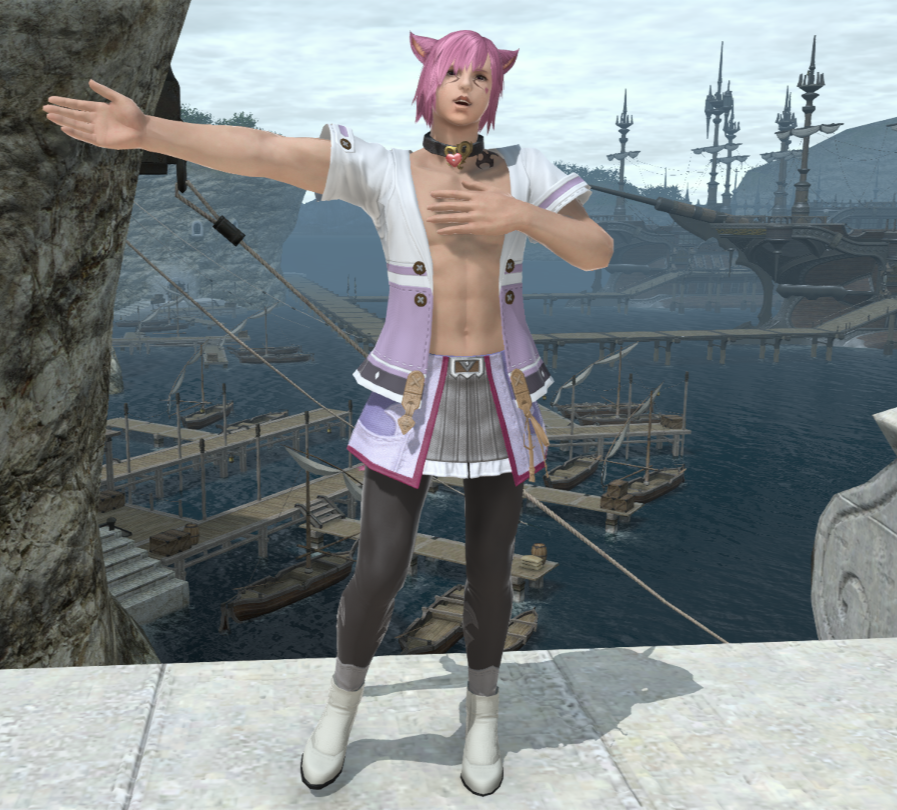 Ash'leytai is an extremely gay Seeker of the Sun Miqo'te, and a mess of gender. Naturally, none of that proved a good fit for the Seekers' heteropatriarchal society, and their strict adherence to a gender binary. So he rebelled, and rebelled, and rebelled, and finally left the tribe. Like most tribe deserters, he founded his own tribe, the Ash tribe—choosing three letters instead of the traditional two, invoking the word for what remains when something (like Seeker tradition) is burned down. Finding the idea of harems distasteful, the Ash tribe is instead a polyamorous tribe. Ash'leytai had expected to be the only member, but was joined by a gender non-conforming Miqo'te boy, Ash'dyalani, who serves as his retainer.

On deserting, he changed his given name to Leytai, a name traditionally given to Seeker girls. He also corrupted Tia into Ati, wanting to queer the concept of a Tia. He's fine with any pronouns, and in fact prefers not to always be gendered the same way. Ash'leytai's gender is a mess, but it's queer, fluid, and non-binary. He doesn't attempt to concretely label it; labels are ephemeral! 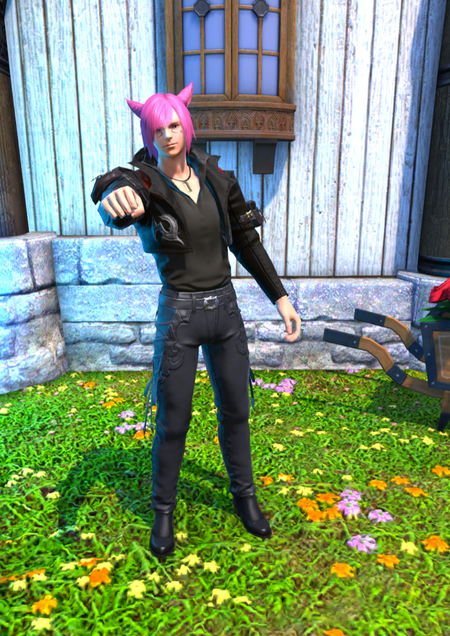 Ash'leytai is an adventurer! After doing anything he could to first arrive in Ul'dah, Ash'leytai became a Thaumaturge-turned-Black Mage, finding comeraderie among the many tribal outcasts who black magic calls to. Building off that knowledge, he also dabbled in being a Red Mage, at the invitation of a cute fellow Miqo'te boy. Still, Ash'leytai sought somthing less... studious. He eventually found his calling in being a Dancer, a job suited to his natural talents as a slut. He now dances on adventures, and for the "enterainment" of patrons.

As a dancer, Leytai has become rather skilled at channeling emotions as weapons. He's begun occasionally using that talent to wield the abyss as a Dark Knight. 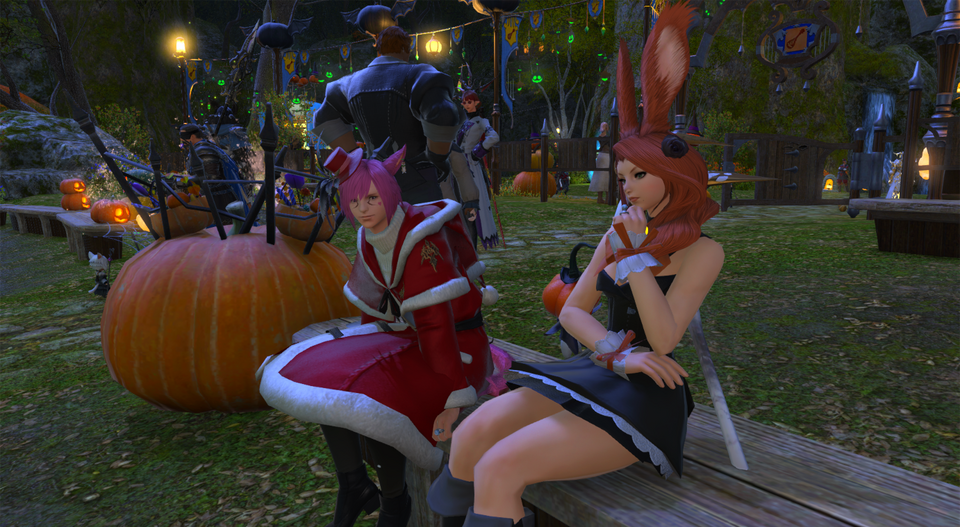 Ash'leytai is Eternally Bonded to Kresh Veldran, his extremely tall bunny partner (whose player is my long-term boyfriend/domestic partner). The two met when Leytai first arrived in Ul'dah, with Kresh showing the new Miqo'te around, quickly hitting it off together. They have an open, polyamorous relationship.

From the Journal of The Warrior of Light

Have you felt the dissonance? The sense that the people around you are living your life? Or perhaps you're living theirs? Have you had that nagging feeling that some of the people closest to you exist on a whole different plain than everyone else? That you're walking between two realities?

Before the Seventh Umbral Calamity, there were many Warriors of Light. Yet ever since Louisoix tampered with time and space themselves to safeguard the warriors, leaving a rend in the fabric of reality where once they existed, no one can clearly remember them. Now, there supposedly exists only one.

Not so. We are, all of us, the Warrior of Light.

You may have heard of the many-worlds interpretation of string theory. It may prove a basis for understanding this phenomenon. For every event that would require a Warrior of Light, time and space—fractured as they are—split in twain. Millions will rise to an occasion that calls for but one. Reality branches manyfold, and in the end, rejoins at the same outcome. The world moves on, each of us and none of us responsible.

Why does reality always rejoin at the same conclusion? Is it the echo we all share, a conduit through which we can experience events not lived, interacting strangely with the fracture in time? And why did so many more of us gain access to the echo when the rend around the Warriors of Light's existence was formed? I have no answers to these questions, but this much is clear: We are all experiencing these events, yet we have no role in guiding them. Time and space wax and wane around one single path, and we are all walking it. It is a many-WoLs interpretation.

A realization so heavy is destined to be rejected by most who begin to realize it. Many who realize they are living two lives will convince themselves one is but a fleeting fantasy. That the realities we live outside the path of the Warrior of Light—as adventurers, as outlaws, as tribal outcasts and wandering minstrels—are the real ones. Others may understand that both are real, but think them unconnected. They may not speak of one in the context of the other, seeing them as wholly separate, for to look directly at the lines connecting the two can make one doubt their own senses.

But for those few who cannot avert their eyes—those who can no longer convince themselves the two halves of their lives are unconnected. To those whose ties to Thancred, Y'shtola, G'raha, Alissae... Haurchefant... are as much a part of them as their ties to those they share a Free Company with. Seek me out. Speak unto me these words. "We may all walk in the light of the crystal."

And when I respond, "All for one light, one light for all," you will know you are not alone. You will find in me a companion to share your triumphs and your loss. For we are, all of us, the Warrior of Light. Nyaa.